How Do You Treat Gum Recession? 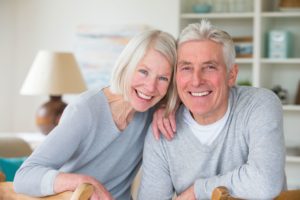 Have you ever heard the expression, “he looks a little long in the teeth”? It’s used to mean that someone looks old. This is a bit misleading, as looking “long in the teeth” due to receding gums can happen to people of any age. What causes this issue? How do you treat gum recession? Let’s take a closer look.

So, how can you tell if your gums are pulling back from your teeth? There are a few common symptoms:

Several factors can contribute to gum recession, including:

How to Treat Gum Recession

Mild cases of gum recession can often be treated with a dental deep cleaning, which involves procedures called scaling and root planing. Scaling entails using special tools to remove plaque and tartar from beneath the gumline. Root planing involves smoothing out the roots of the teeth. This process helps the gums reattach to the teeth. Your dentist may also apply a topical antibiotic to the area and/or prescribe a round of oral antibiotics.

If these procedures are not enough, receding gums surgery may be needed. This used to entail taking tissue from somewhere else on the body, usually the roof of the mouth, and grafting it into the gums. However, many patients felt this method was uncomfortable. Luckily, these days your dentist can usually attach an artificial tissue to the gums and allow them to heal that way.

Receding gums is a fairly common problem, but it doesn’t have to mean the end of the world. As long as you recognize the signs and get it treated quickly enough, your gums can generally heal up pretty quickly.

Dr. Jini Shetty earned a combined Bachelor of Arts degree and a Doctor of Dental Medicine degree at Boston University while still managing to finish school one year early. That’s how passionate she is about dentistry. She has also attended the Las Vegas Institute for Advanced Dental Studies and is a member of the Spear Education Study Club of Southern New Hampshire. Her practice, Dental Designs of New England in Merrimack, NH, offers soft tissue laser treatment for gum disease. If you have found yourself looking a little long in the teeth lately, don’t hesitate to contact Dr. Shetty at (603) 429-2199.

Comments Off on How Do You Treat Gum Recession?

Sorry, the comment form is closed at this time.

Have Questions? Get Answers.